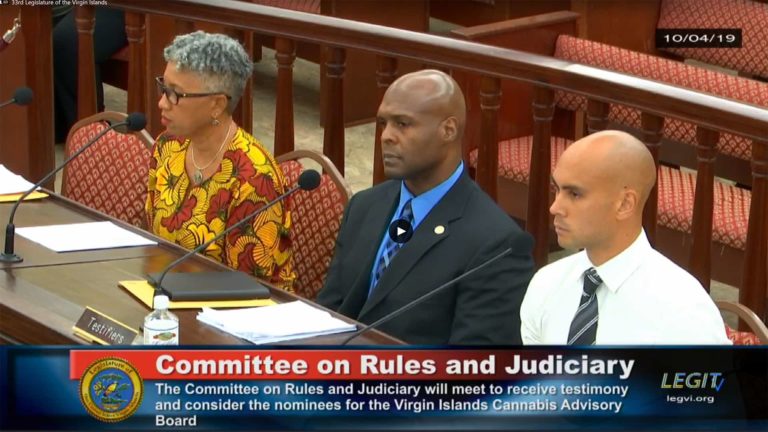 Three Members of the US Virgin Islands Cannabis Advisory Board get unanimous approval from the Rules & Judiciary Committee
October 4, 2019

Today, October 4th, 2019,  three nominees to the Virgin Islands Cannabis Advisory Board (VICAB) were unanimously approved by the Rules and Judiciary of the 33rd Legislature. They now head to the full Legislature body for approval.

Miguel Tricoche, Dr. Catherine A. Kean, and Hugo Roller II all testified in front of the Rules and Judiciary Committee chaired by Senator Janelle K. Sarauw.

Miguel Tricoche is the representative for the Department of Licensing and Consumer Affairs. Dr. Catherine A. Kean, one of the medical practitioner representatives. Hugo Roller II is the board’s representative farmer. These three members, along with Nicole A. Craigwell-Syms where all nominated to the VICAB by Gov. Albert Bryan Jr. on July 23, 2019.

All three nominees to the Virgin Islands Cannabis Advisory Board (VICAB) put on a great display today and give tremendous hope for the future of medical cannabis in the Virgin Islands. Everyone was prepared and shined in their area of expertise.

What Everyone Had to Say

The meaning of “420” put Hugo Roller II on the spot to explain where the term comes from. With both Senators Sarauw and Payne both trying to clear up the meaning, but giving incorrect answers to the question. The correct answer is that “420” was a code-word for a group of friends that used to meet up at 4:20 after school to smoke cannabis, which was then adopted into cannabis sub-culture from the Grateful Dead scene.

With the looming deadline, December 31st 2019, for the publication of medical cannabis rules and regulations. Nominees were asked if they believed that the deadline could be met. All concluded that it would be possible, but it would not be an easy undertaking. When pressed on the issue, Dr. Kean said that it would be impossible to estimate how long it would take without knowing who would be serving on the VICAB, and what expertise they bring to the board. Since only 6 of the 9 members of the VICAB have been nominated so far.

All nominees were all in favor of building a framework for the medical cannabis industry that could later be translated to the legalization of recreational cannabis.

Dr. Kean brought up the idea for medical cannabis “day-passes“. Where a resident would be able to buy medical cannabis and attest to one’s own medical issues, without a prescription. She used the examples of patients buying medical marijuana for one-off issues, such as; headaches, muscle cramps and anxiety. Where medical cards, would be used for chronic and more serious debilitating issues.

St. John farmer Hugo Roller II had a well prepared opening statement, talking about his experience in farming and cannabis qualifications. Visibly nervous, Mr. Roller was able to handle all questions without issue. His greatest moment came at the end of his testimony.

When asked by Sen. Alicia Barnes about whether he was for the recreational use of cannabis. Mr. Roller brought up that legalized cannabis would be safer for the children of the Virgin Islands. Explaining that a well regulated legal market would cutoff the illegal market, that doesn’t have any issues selling illegal drugs to minors. That even if minors were to get a hold of medical cannabis illegally, it would be a much safer product than what is currently grown on the black market.

The name that all the Senator’s had fun trying to pronounce correctly. DLCA representative Miguel Tricoche laid out his experience and vision for medical cannabis in the VI. His military experience shone, with direct and clear answers to every question asked of him.

Mr. Tricoche showed passionate opinions on how to protect local businesses, along with the other nominees, saying we must “ensure that a majority holder in a [cannabis] company is from the Virgin Islands, is a local businessman.  We are going to see an influx of outside investors and interest, once this up and running.  And, it is our due diligence to make sure that we limit the moneys that could be flowing out of the community, because of outside interests. After all we are doing this because we want this to benefit the people of the Virgin Islands.”