The VI Cannabis Use Act was voted on favorably 9-6. Further consideration of the bill will take place, including numerous amendments. Questions about the future of the current Medical Cannabis law.
December 19, 2019

The Virgin Islands Cannabis Use Act was passed onto the Committee of the Whole on December 18th, 2019. The bill was voted on favorably 9-6. Further consideration of the bill will take place in the Senate, with the inclusion of numerous amendments. The VI Cannabis Use Act was assigned bill #33-0235.

On December 3rd Governor Albert Bryan Jr. made a surprise announcement of a recreational cannabis bill that would help sustain GERS from insolvency. The announcement called the VI Legislature into a special session to consider the bill.

UPDATE: Debate on whether the recreational bill is “Moving Forward” has come up. It was VIBE HIGH’s view that this bill had a ZERO percent chance of becoming law, as the bill is currently written, in special session. Therefore, a vote in favor of the bill for further consideration, and assigning a bill number is forward progress. 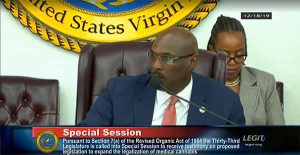 Each Senator was granted 6 minutes of time during the session.

The first statement of the day was the objection to calling the VI Cannabis Use Act a “recreational marijuana bill”. Sen. Novelle Francis contested that the media, and the general public, were wrong in calling this a recreational bill. Comm. Evangelista made the point that, because someone would need to get a permit to buy cannabis, it can’t be recreational. This argument was later eviscerated by Senator Kurt Vialet. The Senator asked the commissioner if anyone would be able to buy marijuana. The commissioner responded as long as they were 21 and had a permit. Senator Vialet responded, “So anyone…”

If you have been following along with VIBE HIGH’s coverage of the VI Cannabis Advisory Board (VICAB) hearings, you know there are running themes to questions asked by Senators.

This hearing was no different. We will leave coverage of the hand-wringing to other news sources.

Excluding those mentioned themes, three major topics were discussed. Hope to save GERS is unjustly pushing this legislation forward. Second, is the USVI even capable of enforcing any type of cannabis regulations? And finally, this bill is flawed and was hastily put together.

The USVI Cannabis Use Act taxes all cannabis sales at 25%. From those taxes, the Government Employees Retirement System (GERS) will receive 75% of the revenue.

Senator Janelle Sarauw said that it is “disingenuous” to use GERS as a means to legalize cannabis. Sarauw was joined by Senator’s Allison DeGazon and Alicia Barnes in this sentiment. Each blasting the Governor for using GERS and other “red-meat” to get the bill passed. Coincidentally, all of the aforementioned Senator’s fully support cannabis legalization, just not in this manner.

STT-STJ Chamber of Commerce representative Attorney Kye Walker testified about projected tax revenue from recreational cannabis. Estimating over $20 million in annual tax revenue. It was later revealed that the estimates used to come up with that number were assuming 3 million tourists a year. Unfortunately, the US Virgin Islands has not seen that amount of tourists in many years. The figure is closer to 1.5 million tourists, halving the tax estimate to $10 million per year in revenue.

GERS, which has a shortfall of billions of dollars, can not be saved by $10 million in new revenue.

Former law enforcement officer Senator Kenneth Gittens was vocal about current cannabis laws. Asking why we are adding new laws, when old laws are not being enforced. Noting that VIPD has not written a single ticket since cannabis was decriminalized in the USVI. Cannabis was decriminalized in 2014, a citation is supposed to be written for possession of less than 1 ounce.

Senator Sarauw stated that the US Virgin Islands suffers from “enforcement deficiency”. For example, Sarauw brought up the DLCA’s poor enforcement of expired food on store shelves. Asking how are we going to enforce cannabis regulations, when we can barely regulate our food?

General consensus among Senators is that the Virgin Islands Cannabis Use Act is a flawed, hastily put together bill. Here is a rundown of some of the issues brought up about the bill.

We are sure to see amendments tackle these subjects and more. The Senators only had 15 days to review the legislation. You can bet more issues are lurking within the bill.

With all the flaws that were brought up during the special session, Senator’s from the 33nd Legislature still voted in favor of the bill 9-6.

The VI Medical Cannabis Patient Care Act (MCPCA) is still the law in the USVI. What happens with the current December 31st MCPCA deadline? Is the USVI going to stop the implementation of the MCPCA while the VI Cannabis Use Act is worked out? Where are the rest of the VICAB nominees?

These questions currently do not have answers. Therefore, the current state of cannabis in the USVI is unknown, it’s future uncertain.

The US Virgin Islands needs to get it’s act together quickly on medical or recreational cannabis before it’s too late.