USVI Governor Albert Bryan Jr. called on the Senate to pass his recreational cannabis amendment during his State of the Territory Address.
January 13, 2020 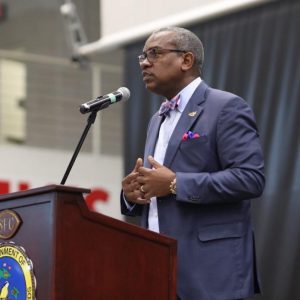 US Virgin Islands Governor Albert Bryan Jr. called on the Senate to pass his recreational cannabis bill during the State of the Territory Address.

On January 13, 2020 Governor Bryan gave his second State of the Territory Address since being elected. The first since he signed the VI Medical Cannabis Patient Care Act (MCPCA).

Since signing the MCPCA, almost a year ago, little has been done to implement the law.

December 31st, 2019 was the deadline for the Governor to nominate, and the Senate to approve, the VI Cannabis Advisory Board. Only five of the nine members have been approved.

An amendment to the MCPCA to extend the VICAB’s formation has not been introduced. The USVI is now in violation of the MCPCA, since it has failed to name the VICAB members.

However on December 3rd, 2019 Governor Bryan made a surprise announcement of a recreational cannabis amendment to the MCPCA. The bill did not receive a warm welcome from 33rd Legislature.

Since the Senate’s initial hearing on the recreational amendment, there has not been any further hearings.

State of the Territory Address

Here’s what Governor Albert Bryan Jr.’s had to say about the recreational cannabis amendment during the 2020 State of the Territory Address:

This past December, I called the Senate into special session to consider the passage of an amendment to the Medicinal Cannabis Patient Care Act. The existing law legalized medical cannabis cultivation, manufacturing, dispensing and consumption.

The proposed amendment submitted to this body amends the law to restrict locations in which cannabis-related activities can take place; it facilitates access to this emerging market for small commercial farmers; and it establishes preferences for participation in the industry by local businesses.

Most importantly, it creates a taxing regime for the local industry that will generate higher revenues than the current law allows. We have proposed that 75 percent of those revenues be dedicated to the Government Employees Retirement System. Twenty percent would support the regulation of the industry, and the other five percent would fund programs for our senior citizens. The revenues generated from this industry can benefit the System as a direct contribution.

However, the goal is to create a funding stream that is reliable enough to ultimately support a revenue bond that can provide a needed cash infusion to the system. This is by no means the panacea or final solution for the GERS crisis, but a small part of a larger solution. It begins the process of generating the new revenues required to stave off the insolvency of the System. It takes existing policy, approved by this body, and leverages it to support this critical area of need.

We must acknowledge the opportunities that regulated expansion of this industry can bring to the territory and the potential benefits to the GERS. I urge this body to take the necessary action to approve the amending legislation we have proposed.